Sentiment analysis is used to determine whether a given text conveys a positive, negative or neutral sentiment. While this may seem trivial there are numerous useful applications. One can gather public opinion on a given topic by mining tweets or triage email to deal with severe or upset customers first.

Building a sentiment analysis tool requires a large annotated corpus to train the classifier. Instead of hiring turkers for sentiment analysis to build the corpus, we proposed a different approach and used ~300,000 reviews obtained from the Yelp academic dataset. While this data is not annotated with sentiment information, we assume that the star rating is an accurate measure of a review's sentiment.

After separating the dataset ⅘ for training and ⅕ for testing, we used MapReduce for preprocessing and extracting the desired features. This data was used to train a random forest classifier. Lastly, we measured our accuracy using the testing dataset.

To preprocess the ~300,000 reviews we used the MRJob package that allowed us to spin up a Hadoop cluster on Amazon's Elastic MapReduce. We extracted the following 14 features from each review:

In addition, we calculated overall 'positivity' scores for varying n-grams. It is a tradeoff, larger n-grams provide better accuracy but require greater computational capacity. With Amazon's EMR, however, extracting larger n-grams should not be a limiting factor. We experimented with unigrams and bigrams.

The individual unigram and bigram scores were computed in a pre-phase 1 stage. The 'positivity' score computed is based on the star rating of each review where that n-gram occurred. Those with fewer than 100 occurrences were ignored.

A random forest classifier is an ensemble of decision trees. Each decision tree can be constructed independently making this an embarrassingly parallelizable problem. Consequently, we were able to easily incorporate MPI where each process was responsible for creating a decision tree. We used the MPI4PY package and ran our jobs on the university cluster.

As mentioned above, ⅘ of the Yelp dataset was used for training which is 240,000 reviews. To construct a decision tree, each process must perform the following steps:

When classifying a piece of text, the random forest passes the item to each decision tree and the output is the majority vote. This may not be the optimal setup. For example, if we have 24 trees 10 of which are predicting 1 star, 7 are predicting 4 stars and 7 are predicting 5 stars. In this scenario, it may be better to select either 4 or 5 stars. It would be worthwhile to explore different setups.

Phase 3: What is our Accuracy?

Our classifier proved to be quite reliable at predicting the star ratings, as shown below. 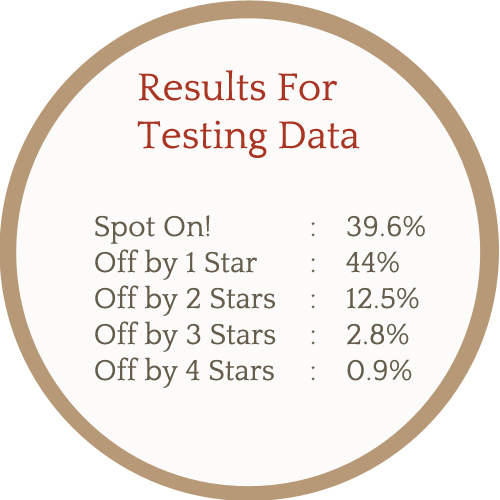 As with many school projects, certain aspects will be rushed to obtain results. There are several areas for improvement and refactoring:

You can find the project here on github. If you're interested in learning about sentiment analysis and machine learning this project can be a good reference.